General Description:
Medium sized and elegantly built, he is an outstanding all-purpose gundog combining and excellent nose with stable pointing, good retrieving, and a positive enjoyment of working in water. He has great stamina and is happy to work in all weathers. He has an aristocratic air, with a lively but stable temperament. His short coarse, easy to care for coat is richly coloured in russet gold.
An intelligent dog, with a good memory which makes him easy to train, he is responsive to intelligent handling. A Popular pet in his native Hungary, where he adapts to living in house or apartment

Head and Skull: Head lean and noble. Skull moderately wide between ears with median line down forehead and a moderate stop. Skull a little longer than the muzzle. Muzzle, although tapering, well squared at the end. Nostrils well developed, broad and wide. Jaws strong and powerful. Lips covering jaws completely and neither loose nor pendulous. Nose brown.

Eyes: Neither deep nor prominent, of medium size, a shade darker in colour than coat. Slightly oval in shape, eyelids fitting tightly. Yellow or black eye is undesirable.

Faults: Any departure from the foregoing points should be considered a fault and the seriousness with which the fault should be regarded should be in exact proportion to its degree. 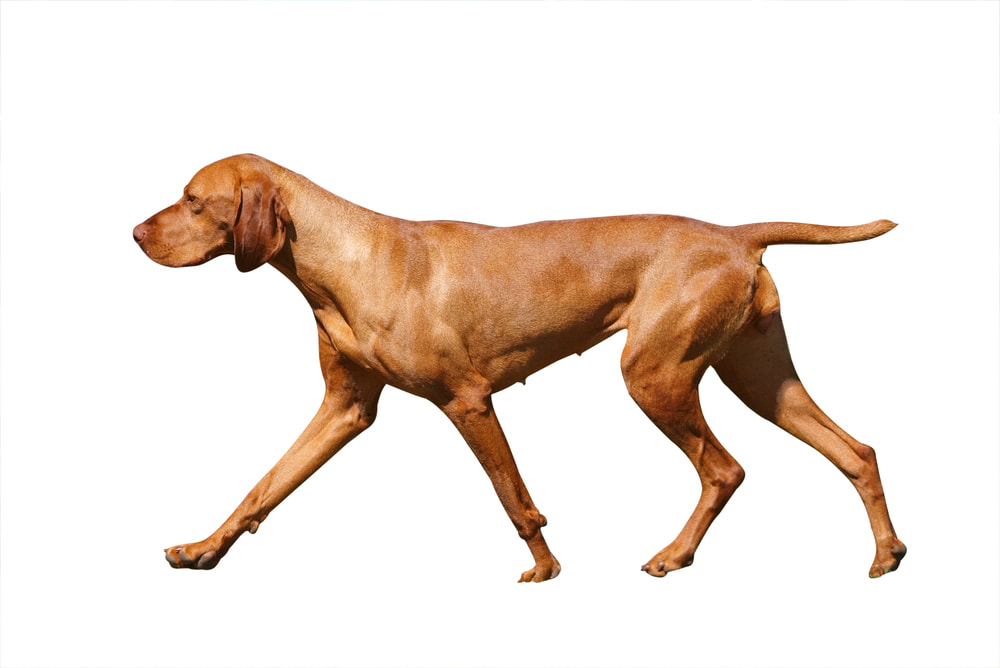 The Hungarian Vizsla was practically unknown in Britain before the last War. It evolved in Hungary by selective breeding to satisfy the demands of the sportsman in the heyday of the Austro-Hungarian Empire.

The Vizsla was first introduced to Britain in the 1950's and became firmly established in the sixties when some new blood was imported from Hungary, and in the early seventies when imports from the United States of America and Austria arrived - this trend continued. The Vizsla competes with success at Field Trials in Britain with all Hunt Point and Retrieve Breeds.

It should always be remembered that the Vizsla is a sensitive dog, which responds to firm but gentle handling. A rough handler will never succeed. As a breed they are extremely vivacious, affectionate and need plenty of individual attention and exercise.

They can make excellent pets but it must be acknowledged that the Vizsla was primarily developed as an all purpose Gundog.
​