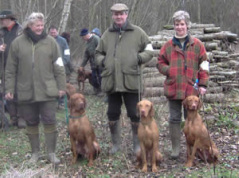 Field Trials are the pinnacle of competition for the working dog. If you want your dog to be a Field Trial Champion with its FT Ch affix this is only place to be. Field Trials are held during the shooting season and endeavour to reproduce the working environment for the dog and handler that could be expected on a normal rough shooting day. They are held usually on shoots with varying types of ground, large enough to run 12 dogs a minimum of twice on fresh ground for each run, hopefully with sufficient game for the dogs to find. Trials are conducted either as Novice, All Aged or Open. To become a FT Ch, your dog must achieve two firsts at Open Trials under different judges. The other stakes, Novice and All Aged are essentially stepping stones to competition at Open level.

The HVS is licensed by the Kennel Club to hold Field Trials and holds a number throughout the season, usually 4 or 5. Click on Events to find out dates. 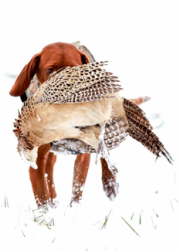 What the Dog (and you) has to do

For the judges to consider a dog for an award, it must Hunt for game, Point game found, flush when told and Retrieve shot game tenderly to hand on command: H+P+R. Each dog gets a minimum of two runs unless eliminated. A dog can be eliminated for what are termed ‘eliminating’ faults and marked down severely on major faults, the list is in the Kennel Club field trial regulations booklet (required reading for Field Triallers and available from the FT Sec or the Kennel Club). The interpretation of the rules is the job of the judges who will strive to keep dogs in the trial as long as possible. As you’d expect, Novice dogs will be treated more leniently than Open dogs, but still – if your dog commits a cardinal sin, it’s out.

The golden HPR trio does not have to be performed on a single run. If a dog has hunted well, pointed a bird which is then subsequently not shot it gets two ticks: H+P. Now it needs a Retrieve, no matter if later on in its 1st run or in the 2nd. The dog will get the best marks from the judges, however, if it manages to perform HPR on one or more birds, ie it hunts it, points it, flushes it when told, is steady to shot and retrieves the bird (undamaged) nicely to hand. If your dog can do this, you’re on your way to winning FT awards, if not – you now know what has to be done!

On the day?
The entry is limited to 12 dogs, over-subscription triggers a ballot from which the 12 runners are drawn, followed by a list of reserves. When you arrive, the steward for the day will introduce the judges, the guns, red flag and picking-up dog. The Steward’s job is to ensure the smooth running of the trial , to liaising between the Judges & Competitors, making sure the right dog is with the judges when required and generally keeping everyone happy. Red Flag holds a Red Flag behind which the non-competing dogs, handlers, audience (‘the gallery’) must stay for safety reasons.

The two judges are Kennel Club approved and will consist of at least one 'A' panel judge. When called to run by the steward, you will be told by the judges where your dog should hunt by pointing out the direction of progress and indicating any boundaries they wish you to observe. Set your dog off and hopefully it will hunt for game, quartering the ground until STOP!

Your dog's on point! You raise your hand to 'claim' the point which also serves to alert the guys with the guns (known as 'the guns') that they may be shortly called into action and to get into position. This done, you will be told by a judge to produce the bird (if indeed there is one there) by sending the dog forward to flush it into the air where it can be shot. As soon as the bird lifts, your dog should be steady (preferably in a sit), and wait for the bird to fall. Once the bird is on the ground, a judge will instruct to you 'send your dog' to retrieve the bird back to you. Once in your hand, the bird is passed immediately to a judge who will verify it hasn't been damaged by the dog's retrieve. You will then return to the gallery having been told if you will be required for a second run. The next dog is then called up.

Dogs not eliminated in the 1st runs will be required for a 2nd run which is a further opportunity to complete the golden HPR trio if not already done so. If you’ve had a blank 1st run – no point, no retrieve – you have everything to do. If you’ve had a retrieve, you need to get a point. If all has gone well and you are still in the trial at the end of the day, you will be invited to the last stage which is a water retrieve on either game that’s been shot on the day or pigeon. The water must be completed before a dog can gain an award.

Awards
Available are 1st, 2nd, 3rd, 4th and Certificate of Merit (CoM). They are given at the absolute discretion of the judges. Usually, if a dog has done the HPR adequately and completed the water, you can expect a CoM. The judges are not obliged to award 1st, 2nd or 3rd so you may find a 3rd only is awarded along with some COMs, or a 1st and 4th and no CoMs or any other combination. 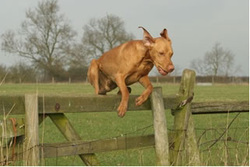 Field Trial awards are not won lightly. A CoM at Novice level will get you to Crufts for life in the Field Trial class, and is this alone will tell you the Kennel Club consider it to be no mean feat. If you want your dog to be a FT Ch, you have to compete and win – this is the goal of many, only a very few will realise it.All else aside, Field Trials are a fantastic way to work your dog alongside like-minded individuals and on grounds that you would normally only dream about having access. For all there is the pleasure of seeing your dog out there, running wide and far across sugar beet, or carefully checking bracken cover in woodland, magically pointing that elusive bird. No substitute for that. Finally, this is what the Vizsla was bred to do: Hunt, Point and Retrieve. The Hungarian aristocracy did not spend years of effort selectively breeding a dog purely to show. Their efforts were aimed at producing a conformationally sound hunting dog. If our dogs are not given the opportunity to practice their skills in the field, they will, as with any other skill, gradually lose the ability.