The Vizsla belongs in dogdom's aristocracy; he shows it in dignified bearing and proves it in recorded history. While the Vizsla is new to the Western World it is perhaps the oldest bred of the great European Vorstehund group of shorthaired pointing and retrieving dogs. The Vizsla achieved recognition as a breed centuries ago. However, the breed was never popularized in an American sense, but was rather restricted to the nobility. There is a long though unheralded history behind this unusual breed. - Primitive carvings in stone in the Carpathian regions - estimated 1,000 years old - show the Magyar hunter, his falcon and his Vizsla.

The Magyar Vizslas (Hungarian Pointers) honour their nomadic masters who roamed the Carpathian plains and valleys ten centuries ago. Herdsmen and hunters, these early Hungarians began the development of companion-hunting dogs to find, point, and retrieve native game, and to tract (sic) wounded large game. Successive generations continued the development of the breed and by the Thirteenth Century the beautiful golden Vizsla was a distinct breed, recognized and prized as a companion-field dog.

The word Vizsla, according to the Hungarian Etymological dictionary by G. Bordi, is documented first in the writings in the year 1350 as the name of a village on the Danube indicating that Vizslas may have been found in its environment. With the meaning "dog" it is documented in the Berstence Glossary compiled toward the end of the 14th Century. It is supposed to have come from the oldest layer of the Hungarian language, from a root -Vis- which means "to search."

Credit for revealing the Vizsla's claim to ancient and honorable lineage is due to the former Secretary of the Hungarian Kennel Club, who may well be one of the last living experts on the breed, and fortunately is now in this country. Prior to the occupation of Hungary by the Russians during World War II, the Hungarian Kennel Club began a search of family records and heirlooms for documentary proof on the history of the Vizsla. A priceless collection of evidence was compiled. Private documents, drawings, paintings, and sculpture confirmed the Vizsla's existence in the 10th Century. Its history throughout the Middle Ages is confirmed in letters written in the 15th and 16th Centuries now in the National Archives in Hungary. 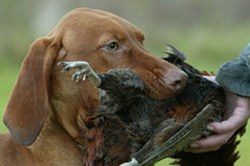 The Vienna Chronicle, a manuscript of the early Hungarian codes and laws dating from the time of King Lajos (Louis) the Great (1342-1382) contains a chapter about the falconry of the nobility with a picture of the Vizsla. Hungarian historians mention the favorite Vizslas of their heroes. Documents of the Turk occupations of Hungary (1526-1686) deal with the Vizsla breed chiefly in the correspondence between the Danubian provinces and the court of the Sultan of Istanbul.

The breed existed beyond question of doubt in the 1200's as the "Yellow Pointer." As the breed became progressively more popular, "Hungarian Pointer" gradually replaced the term "Yellow Pointer." Throughout the 100 years of Turkish Occupation, the now famous all-purpose dog frequently was mentioned in correspondences of the era. By the 16th Century we find "Vizsla generally accepted and used as the breed name.

One Janos Gyulai writes in Latin, in 1563, to Kristof Batthyani; "We know that your Honor possesses smaller sized hawks. Don't leave us without one or two of them. And do send us please a bird-chasing Vizsla too. (Sed et canem odoranium vulgo fyrejre valo Vizslath nobis dare velli)."

Mihaly Komlossy writes his brother, Tamas, on August 15, 1515:          "…besides, my beloved brother, I ask you for a good Vizsle (sic), fit for birds. And let the squire know that Janos Koesis is in the know about the falcons because he worked with the falconer of Kristof Krassy and had to handle them." (Lampeath, Old Hungarian Letters 202).

Early in the 18th Century, Zolton Hamyay (landowner of the county Gomor) and Istvan Barczy de Barczihaza (landowner and Cabinet Councilor) established purebred records in the form of a studbook, and the now famous "Golden Vizsla" was documented as "Magyar Vizsla".

The golden Vizsla was the favorite companion dog of the early barons and warlords and, with the evolution of the nobility and large landowners, the breed was preserved in its purity through the centuries. There is little doubt that its ancestors were the hunting dogs of the various Asiatic tribes that invaded the lands of Central Europe until the 10th Century. The Vizsla presents several specific breed-marks, apart from the characteristic rusty-gold coat, that have never been found in any other variety of pointer. The Vizsla was an established and recorded breed at least 300 years before the Nobles of the Courts of Weimar set out to develop the Weimaraner around the year 1810, or before the first English Pointers were introduced into the Hungarian Kingdom in the year 1880.

Throughout the ages the Vizsla has been known as a "Gift of Kings" and breedings were restricted to the Nobility of the Greater Hungarian Kingdom, which covered Hungary and Czechoslovakia prior to World War I. To receive a "Royal Golden Vizsla" was an honor bestowed to only a very select few, such as the Queens of Italy and Spain, and Princess Iolanda di Savia, daughter of the King of Italy. The Vizsla bears the official title of the "National Pointer of Hungary" and the breed is especially protected by the Magyar Ebtenycstok Orsagos Egyesulete, whose purpose is to maintain the high standards of the breed.

The Vizsla is a rather privileged canine and holds a very high place in Hungarian sporting circles and is not expected to sleep outside at the finish of its day of work. The Vizsla always lived with the family, and was as much a part of the family as the children. It has been said that the Vizsla must live with the family if the family is to benefit (deserve) the loyalty and affection the Vizsla has to bestow. This breed has an exceptionally good disposition, is very affectionate, and instinctively fond of children. They are an apartment-sized family hunting dog.

The Vizsla is striking in appearance and never fails to attract attention. They have a very beautiful and distinctive shorthaired rusty-gold coat as well as a dignified and aristocratic bearing which sets them apart. They present the picture of versatile aristocrat, well balanced and with a look of intelligence and animation; a dog of great driving power, stamina, rugged constitution, in which the desire to hunt and the well-defined pointing and retrieving instincts are deeply ingrained. They have extremely high intelligence potentials and are exceedingly tractable and willing to obey whenever they understand. They have a rare adaptability to new conditions.

The Vizsla is a robust animal of considerate skill at its work, a shade taller and some pounds heavier than the English Pointer, and has a dominant natural instinct to point and retrieve. They are medium-sized, males generally weigh from 45 to 57 pounds; females about 10 pounds less. Height at the withers is generally from 19 ½ to 23 inches. The head is fine featured and aristocratic. The color of the iris of the eye should correspond to the lighter or darker hue of the coat. The ears are carried pendant, wide at the base and rather low set. Their tails are generally docked to about 6 inches giving the animal a unique appearance and at the same time avoiding the danger of having their flags whipped raw in heavy cover. Legs are straight, slender but well muscled. The feet are cat-like rather than hare footed. The carriage is deliberate. In action the Vizsla is extremely fast, yet its movement is so smooth and graceful as to appear effortless.
Through centuries of careful selective breeding, the patient and thorough Hungarian breeders developed a dog of great versatility. He is able and willing to track down game with the gameness and keen nose of the bloodhound; to point instinctively his feathered game with the sure location and staunchness of the Pointer and Setter; and in addition, with the strength and fortitude to brave rough and icy water in retrieving waterfowl. The Vizsla possesses all three traits.

They are dogs of unusual stamina and courage, no matter under what conditions they are called upon to hunt. They have been used to hunt partridge, pheasant, ducks, geese, rabbits, wolf, bear, deer, and boar. Their nature is to work the ground carefully and pick up with their keen nose, the faintest scent, working it out to a contact with game. Their superb nose proves ideal for man trailing.

The Vizsla is trained to search diligently rather than to range too quickly, to seek, track, point, and retrieve, thus serving a multiple purpose. The robust Vizsla is commonly used for retrieving the huge 10 pound European hares as found on the edge of the Hungarian puszta. He is a natural retriever and is equally at home on land or water.

On upland game the Vizsla really comes into his own and combines the duties of the pointer and retriever. He is very fast, extremely birdy, has an exceptionally good nose, a finely discriminating bird sense and points by instinct. He possesses an ideal "soft mouth" that does not mar the game in any respect.

John Fogarassy-Wallner (famed Hungarian born artist) states as follows: "They had to take every hardship a human being could take; they had to stand the heat of our August sun; sit with us in a goose pit; swim icy waters after ducks; chase down wounded jack rabbits and retrieve them from half a mile away at times. Be absolutely obedient, and serve just one Master, so far as hunting was concerned. They were members of the family and we loved them but they had to have good manners and they had to behave".

Comparisons are said to be rather "nefarious". However, to properly classify this breed, it probably is essential to quote from Continental descriptions which compare the Vizsla with other pointing breeds. A European source states that the German Short hair, English and Vizsla pointers have excellent noses. The English pointer is extremely fast, the German the slowest and the Vizsla swift and not as wide-ranging as the English, but persistent on trail. The English is a poorer retriever while the German and Vizsla are excellent retrievers and the Vizsla more gentle mouthed. The Europeans also compare the Vizsla with the Weimaraner and state the Vizsla pointer is smaller, much faster, has more pointing instinct, is a more gentle mouthed retriever and is of a distinguished colour more suitable for use in the field.

To summarize, it appears that the Vizsla occupies a position between the extremely fast English pointer and the slower German short hair; combining some of the known excellencies of both breeds together with a very distinctive colour, type and dignified aristocratic bearing which sets him apart. The finely discriminating bird sense is deeply ingrained, in that the Vizsla's home country is and has been for centuries, the low lying Danube Valley and brad Hungarian plain where the grey partridge thrive on the grain bin of Europe. The Vizsla breed has survived the Turkish Occupation, the Hungarian Civil Wars, World Wars I and II, and the Russian Occupation. The spread of the Vizsla to other parts of the world had changed little from the Middle Ages until 1945. As late as World War II the Vizsla enjoyed protection in selective breeding, as only the remnants of the aristocracy and the large estate owners were permitted by custom to breed.