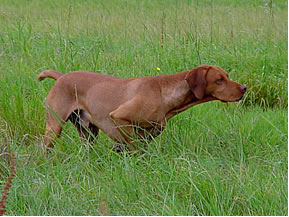 Spring Pointing tests are to assess a dog’s natural working ability, its ability to find and point game, pheasant and partridge. As the name suggests the spring pointing season is March to April, the crops being just high enough to hold birds giving the dog the chance to point them.

The tests are conducted on open ground, large fields of rape, winter drilled wheat and barley, permanent set-aside as well as spring crops (beans, rape, peas etc) so the dog has the chance to show off its ability to run, a delight to see. Emphasis is firmly on junior dogs (over 6 months and not more than 2 years) and so the events are relaxed, nicely social affairs with none of the pressures of the working test or field trial. Entries are restricted usually to 12 dogs, an over-subscription will trigger a ballot with junior dogs receiving preference over adult entries in the draw. 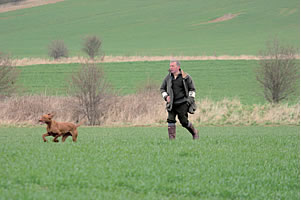 After gathering, the organiser will explain the plan for the day and introduce the judges. Out in the field the first dog is called up and the handler told the general direction of progress. To help the young dogs they will be run into wind wherever possible. Off with the lead and let the dog run, quartering the ground in search of game. Usually the first minute of a run is not judged to allow the dog to settle down, the judges will say when this time is up to let you know that they are now judging the dog’s performance. They are looking at the style of the dog, how it covers the ground, uses the wind etc, but most importantly it will be judged on its game finding ability - how it points and what it points - junior dogs will be judged on pointing pheasant and partridge while adult dogs will be judged on partridge only, such criteria will be published in the schedule and will be announced at the beginning of the day. A dog will usually be run for 10 minutes even if it finds and points game in the first few minutes with the possibility of a second run if no game can be found. With 12 dogs to run with the possibility of 2nd runs, the whole day is easily consumed, talking of which – take lunch with you.

At the end of the day, presentations with certificates are made to those dogs who the judges have found to be Excellent, Very Good or Good. 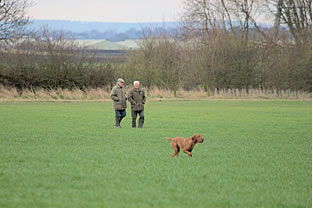 What standard does the dog have to be?

As there is none of the requirements for your dog to perform tasks as in working tests and none of the formality of the field trial, Spring Pointing is perfect to come along and just run your dog. The emphasis is very much on young dogs so no-one is expecting flawless behaviour or handling. It’s well worth remembering that your dog will only get one chance to run as a junior so just go for it!

Where can I find out more?

Contact the FT Secretary. Spring Pointing tests are conducted by all the main breed clubs, there is bound to be one in reasonable driving distance from you. Each breed club will have published their own spring pointing guidelines which are worth obtaining.