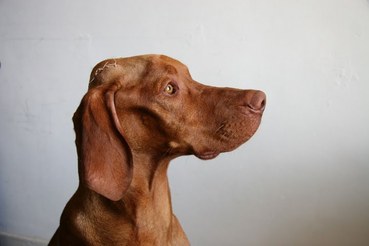 An example of a Vizsla with Polymyositis
From around 2004 onwards observers began to note that a number of young vizslas were succumbing to a swallowing disorder which had not previously been clinically recognised. “Myositis & Dysphagia in Hungarian Vizslas” is now the subject of a veterinary research project

The condition is still uncommon, and most vizslas are unlikely to be affected by it, but for the purposes of the research project, all responsible owners should be aware of the signs to look out for (the disease is so unusual that many local vets may not recognise it either!)


What are the symptoms of Polymyositis?

The signs of the illness are problems with swallowing - both food and water - excessive drooling, and usually also muscle wasting around the head. Typical onset is usually in adolescence or maybe up to about two years of age and frequently there is an acute episode of retching, gagging, choking, dysphagia and hypersalivation. Sometimes the onset is more insidious with just inefficient and messy eating and drinking being noted. Often there is an initial diagnosis of megaoesophagus. Significantly elevated CK levels, fatigue, aspiration pneumonia and a stiffness of gait are other common findings. The illness is believed to be immune mediated and inheritable. With prompt diagnosis and treatment it can usually be well controlled.

Polymyositis is more fully described here. All responsible breeders are including a fact sheet in their puppy packs. If anybody reading this knows of a vizsla to have been diagnosed with myositis/polymyositis – or to suffer from the clinical signs that we have described – then please could you contact those conducting the research.

What to do if you suspect Polymyositis?

Polymyositis usually occurs before 2 years. "auto-immune* illness requires a trigger - and usually for these PM vizslas it has been "puberty" (hormones) - hence early presentation. There could be many other triggers in "predisposed" individuals ie Vaccination/stress/diet/environmental factors.


Click to see More pictures of dogs affected by Polymyositis

Since early 2005 there has been research into the Hungarian Vizslas apparent predisposition to polymyositis.

This is an immune mediated illness.

As our investigations unfolded we began to wonder at the incidence and relevance of other immune mediated disorders. Might there be a connection? We do not know and only by asking people to tell us of their experience can we begin to establish what might be a bigger picture. These other illnesses are described here. For the purpose of this investigation we are also hoping to explore some less defined disorders and we are particularly interested in allergies and intolerances (skin and food) and gastro-intestinal disease particularly. Of course we must also remember that chronic autoimmune disease is usually multi-factorial, meaning several things must happen for an individual to become ill. Very often a trigger is required and this is something that we must also investigate.