The Society has a variety of awards for those members achieving distinction in Field and Show. Awarded at the AGM for achievement in the previous year, they are a source of pride to the winners as well as a very public acknowledgment of the commitment and skills of the combination of dog and owner. 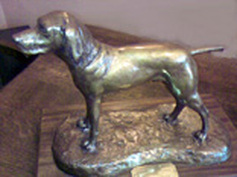 This imposing trophy of a Vizsla and cast in bronze and awarded to the highest combined score of working and showing. 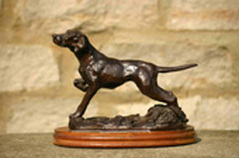 ‘Heredities’ a pointing Vizsla in bronze on plinth, awarded to the highest score in Field Trials. 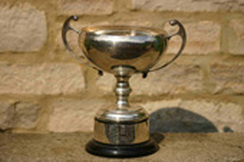 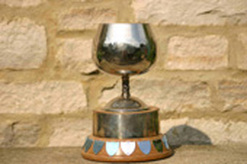 Large silver cup on plinth awarded to the highest score in Spring Pointing.

Round silver salver awarded for the highest score in both show and working events, in the proportion of not more than 1/3rd to 2/3rd. 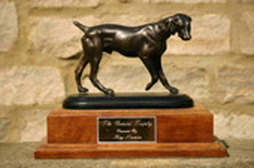 Model of Vizsla on a plinth. Awarded to the runner-up of the Mabel Deakin Trophy.

Cut glass rose bowl on dark wooden base. Awarded to the highest score in showing

Donated by the estate of the late Alec Macrae.

Silver Vizsla depicted in Shetland Stone. Awarded to the highest number of cumulative working points by a dog up to the age of 3 years.

Points can be earned for achievement in the Field and by Showing according to a points system. The scoring system can be downloaded here.

Keep a list of the events you enter, the date, the venue, class or stakes entered along with where your dog was placed and use the points calculator above to claim the relevant number of points. For example, if your dog is awarded a BIS at a Championship show you would claim 25 points.  The awards year runs from 1st February to the 31st January of the following year, so collect up all your points and send your claim to the Trophy Steward to arrive by the 15th February.

You can download a Trophy Claim Form by clicking HERE (.doc file)

Trophies are presented at the Annual General Meeting to the winners in each category.